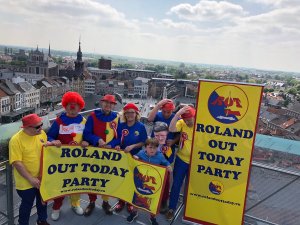 Quite ironic isn’t it that we still have the crackpot nutty professor in charge yet new owners wait on passing the EFL’s ‘Fit and Proper Persons’ test. Andrew Muir’s Australian group plan to complete the takeover of the club within the next couple of weeks, all depending on how long the EFL take to do whatever it is they do.

Undercover work by one Addick has unearthed a newly established UK company called Echidna Acquisitions registered by expected CEO Gerard Murphy on April 30th with Australian Football Consortium as shareholder. Two plus two would tell us that this is the vehicle the Aussies will use to acquire the club.

Charlton fan James Dutton, who is Jimmy Seed’s grandson has added some more, seemingly positive vibes, on his Blog here.

James adds weight to what both Rick Everitt and Rich Cawley were told during the week that the new owners will run a legitimate interview process for a new manager, which will include Lee Bowyer, who has now apparently been spoken to by representatives of the Aussies.

Meanwhile today the political party Roland out Today (ROT) were in Roly’s Sint-Truiden to hand out leaflets and canvass opinions from local voters as they plan to stand in local municipal elections in October.

By all accounts dressed as clowns (photo) they got a good response from the locals in the Grote Markt but then the local constabulary showed up and shut the whole thing down. He really doesn’t like it up him.

Counting the days to he’s gone….