ESI takeover in shreds as Tahnoon Nimer pulls out 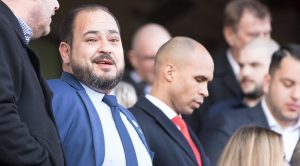 Chaos reigns again tonight after HE Tahnoon Nimer announced on social media to fans that he is pulling out of his Charlton investment. He has blamed Matt Southall and the senior management, which is really only Southall and Jonathan Heller of repatriating money for their own good. The voice note is something else. Listen here.

Later on the OS, Southall issued a statement saying that a letter was received today from Tahnoon Nimer which is in the hands of his lawyers for whom he will discuss what actions to take. Threats have been made to other members of the club’s senior management, about what who knows as East Street Investments morphs into a school playground squabble.

The supposed majority owner of Charlton was pictured outside Dinamo Bucharest on Saturday whilst we were losing to Middlesbrough.

How the f did we deserve this?

Questions of ESI, funding and Matt Southall’s qualifications in the role had started to surface ever since, well ever since Southall approached Peterborough owner Darragh MacAnthony to buy Ivan Toney to us then ending with three loaned cast off’s on deadline day.

Southall, who is driving a very nice looking Range Rover, has wooed us on social media, but talk costs nothing, and it’s difficult to see how without Nimer’s backing, the club can sustain itself financially. Remember The Valley and Sparrow Lane still belong to Roland Duchatelet.

Although according to Southall the Syrian has “yet to satisfy the EFL in respect of the source of his funds, despite numerous requests made by the EFL and a number of deadlines that have been ignored by him.” Also that “to date, not a single penny of the promised funds has been provided.”

Southall also throws Bowyer’s new contract into the mix of the war of words, even though it was long stated As a joint ESI aim. What a “disadvantageous contract” is I don’t know.

Who the hell to believe? And all the time the circus that is the EFL watch over us like a blind and death babysitter.

Not mention Roland bloody Duchatelet’s due diligence incompetence. Do we even know if the Belgian got paid? And if so, by whom?

What a mess, which may also explain why Lee Bowyer has looked so anguished these last couple of weeks.

I tell you what. If I hear an Arsenal or Spurs fan tomorrow bemoaning how awful it is being one of their fans, I am going to kick them square in the balls. Be a Charlton fan for a minute. Just a minute!