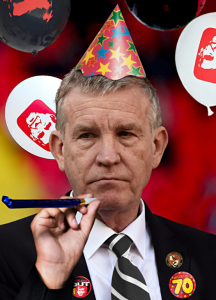 Honestly is there no end to this man’s derangement?

“The fans missed a big chance. I would have been able to bring the club into the Premier League.” (more)

These quotes came from a meeting that Roland Out Today (ROT) had with Duchatelet whilst they were in Sint Truiden recently and bumped into him when they went to RD’s hotel construction site. A full transcript can be found on here.

The man has blamed everyone and everything apart from himself, oh and that old bint, and that “super guy” Richard Murray. Think I’ve just thrown up.

Now I don’t believe anything the old sod says, he’s absolutely barking and I think the man has the foresight and intellectual ability of a gnat, but he does know how to turn a screw, and point fingers.

He denies that the takeover is waiting on EFL ratification, but the Aussies’ lack of funds. He also agrees that he did want to keep the land, but some of the ex-directors refused. In fact we are not even sure they were approached on this basis by the Aussies.

Always the victim, when all along it is he who has victimized, duped and cheated a football club out of four years of it’s history.