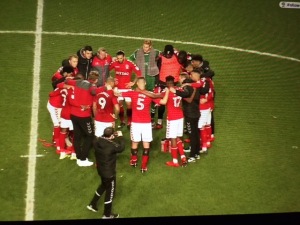 And a stuttering and often ugly performance tonight but 3 very valuable points against what I was thought was a very decent Rochdale team, playing with a style far better than their league position indicates.

I watched for the first time on EFL’s iFollow service, which allows overseas fans to watch live games. Charlton remember don’t subscribe to iFollow but almost all of our League One opponents do and for a fiver for a match pass I thought it was good. No commentary just live pictures and atmosphere, although there was a delay in the sound, but I’d recommend it, if you are able to take advantage. By the way I would encourage you take this CAFC media team’s survey on their Valley Pass service.

We started the game terribly save for a couple of efforts at goal, but we were sluggish and for me it was no surprise that Dale took the lead when debutant Gillam swept home in the 14th minute. Not long after Gillam nearly scored again, his shot on the turn hitting the inside of the right post and travelling along the goal line and out.

We were just not able to get a foot in the door and Dale frustrated us with a range of delaying and fouling tactics, which would have annoyed me if I was in the Jimmy Seed Stand because I thought they would have been better off keeping possession, which they did well at times, and take the game to us on the break.

Another Dale foul brought a booking and a free kick with 10 minutes to half time. The ball went out to Dasilva and his cross bounced around a bit but found an advanced JFC who pounced to poke home and we were level. I was disappointed that we then didn’t put our foot on the throttle before the break but at last we went in on equal terms.

2nd half we came out with a rocket up us and it was much better and I was pleased to witness with my eyes the kind of football that Robinson has cultivated. Pacy and direct with Mark Marshall leading the charge and Magennis working his socks off. KAG on for Reeves, who I thought was anonymous, was improved but he doesn’t look like scoring and he did have a great chance to score late on.

After a nice, very un-League One-like passing move, Kashi hit the post with a great shot. But Dale were still dangerous and Henderson, who I liked the look off, had a goal bound effort saved alertly by Amos.

Marshall was getting warmed up and I liked his directness and a shot from him which was spilled by Dale’s ‘keeper allowed JFC stealth like to steal in again and put us ahead. We had other chances but were still unable I felt to put our mark on the game and Rochdale had a lot off the ball in our half in the last part of the match which had me on the edge of my seat a bit.

Anyway the final whistle was met with a big cheer from The Valley crowd who provided a very good atmosphere throughout, although it galls me to see so many empty seats. A good 3 points that keeps us 4th.