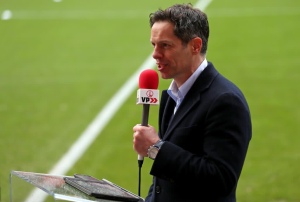 I’ve been watching games on iFollow and Valley Pass for a fair while, we have been allowed to buy live coverage since 2017 as overseas’ fans. Yet while grateful to be closer to the ‘match day experience’ there was nearly always picture, sound, buffering or latency issues and the home viewing experience was mostly perfunctory and not necessarily pleasurable. Taking the emotion out of the result and team performance of course.

I tended mostly to listen just to the commentary, but the live pictures have steadily gotten better, notably last season after lockdown when it simply had to pick up it’s game.

But what a very enjoyable experience yesterday’s Valley Plus Live was…. again trying to forget about the result as part of my evaluation.

Scott Minto presented the three hour show, and is an obvious natural. Why or what Sky Sports were thinking only they know, but Minto is polished, bright and totally biased, what’s not to like? Good looking chap too. Jason Euell was the guest, who was particularly insightful at half-time.

The multiple camera angles were excellent, pregame we got some behind the scenes content and were given another chance to listen to Thomas Sandgaard speaking on the pitch with heart firmly on sleeve. Straight after the match Minto interviewed Jonny Williams with a smile as long as the Blackwell Tunnel before he jumped out The Valley tunnel, and the the show wrapped up with Lee Bowyer’s postgame thoughts.

Bearing in mind the Addicks’ didn’t even commit to iFollow initially the club have come a long way, and since Sandgaard’s arrival have taken the massive, and not inexpensive steps to take the coverage in house and present the game as a proper show.

It was a tenner very well spent. Curbs joins Scotty Minto for the Tuesday’s game.