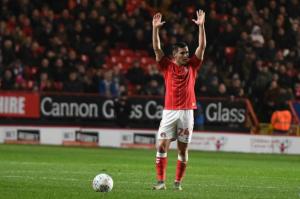 Josh Cullen fresh from his comeback game last night for the Addicks announced that this month West Ham have triggered a one year extension to his existing deal meaning that the midfielder will not be out of contract this summer.

By the time this season ends Cullen could have made 63 league starts for us, which is precisely 63 more league starts than he has made for West Ham. Yet Cullen has always been very honest about his future and is desperate to make it at the Taxpayers Stadium and David Moyes did give Cullen his Hammers’ debut in 2018.

Moyes likes good old fashioned hard-working players and will promote youth, unlike his predecessor and Cullen fits both bills. Yet the more cynical amongst us will possibly think that David Gold has only sanctioned the extension to make sure he gets a fee knowing that Steve Gallen will be at the front of the queue with (maybe) a larger cheque book than we had last summer.

There’s also a distinct possibility that West Ham and Charlton will be in the same division next season..