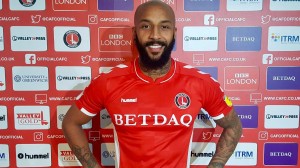 Roland Duchatelet has made some shameful decisions in his time as Charlton owner, but selling our top scorer, and pocketing the £2m, then offloading high wage earners Nicky Ajose and Billy Clarke and allowing just a short term signing of a 28-year old journeyman from Gillingham in the last 72 hours of the transfer window might top the lot.

As our promotion rivals all around us invested heavily we slunked into the background like someone uninvited to the party. If Bowyer and Jackson keep us in contention, Lennie Lawrence’s crown of adversity will have been well and truly topped.

The signing of Jonny Williams was a positive, but replaced an always likely to depart Clarke. Although Williams, like Parker now adds to the list of a squad of players who’s contracts run out in the summer. A classic Duchatelet play. Ben Purrington was a necessity and Chris Maxwell replaced Steer.

Mo Elsa was linked heavily, but it is thought Bristol City would only release the striker if they brought someone in, which they didn’t. Elsa was possibly who Bowyer was talking about. Sunderland were in for him too, but whereas Charlton rumours were scarce, the Black Cats were trying to snap up everyone and anyone.

Welcome Josh Parker, you will get all of our support, but clearly he was a target to replace Ajose. Meanwhile the hole left by Karlan Grant gapes like an open wound tonight with a big bag of salt being poured into it.

Steve Gallen and Lee Bowyer would have worked bloody hard to make something happen and Bow sounded particularly pissed off tonight. Now he has to motivate the players. Lyle Taylor, who we really now need to rely on, was one of a few players who spoke out about strengthening the squad in January. Duchatelet’s greed and short terminism has left it weaker.