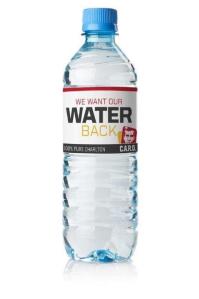 If only CAFC would have given us this interview with Lee this morning, could have saved a lot of frantic refreshing and roaming charges. You are not the only one on cut backs you know Charlton.

By the way did you see CARD’s latest stunt was to deliver 100 bottles of water to the academy team at Sparrows Lane this morning. Brilliant, and it really caught the imagination of the nation’s media.

Of course that dipstick Tom Rubashow was behind the quote that the club had stopped giving the academy players bottled water for environmental reasons. Just like those balloons they were going to let off last season and the plastic bottle tops that the club insist on taking of your drink at The Valley that end up on the floor. Oh and the plastic hangers they hang the replica kits on in the shop….oh.

Just so everyone is crystal clear:
Roland Duchâtelet, Charlton’s billionaire owner, who cited the club’s brilliant academy as one of the reasons he bought the club, is no longer willing to pay for academy players to drink water or eat breakfast at the club’s training ground #cafc

They honestly think we are stupid.

Anyway as tumbleweed floated around The Valley car park today. Come on, who was surprised we didn’t ‘buy’ anyone? Bowyer said after the deadline passed that a player will sign tomorrow on loan subject to medical. Possibly a goalkeeper, or a centre-half, even more of a requirement with Jason Pearce now out for a couple of weeks.

Another player linked, and it may tally with what Bow said: “There is one that we are praying doesn’t go to a Championship club because if he doesn’t then I know he is going to come to us” could be Leeds midfielder Eunan O’Kane.

Bowyer could pull some Leeds strings here and being a midfielder himself will be trying to convince the Eire international that a season, or at least half a season at The Valley will re-ignite the 28-year old’s career.

O’Kane was instrumental in Bournemouth’s emergence, but like others, Harry Arter today, he was pushed down the pecking order. Now at Leeds under Marcelo Bielsa’s big plans, O’Kane was not given a 1st team shirt number, and they were hoping to sell him before today, but he remains at Elland Road.

If, and this is a bloody huge Duchatelet size if, if O’Kane signs then it will underscore the comments that Bowyer will only use the budget to bring in better than he has got.

Good news was that both Patrick Bauer and Joe Aribo remain. But Josh Umerah, one of our 26 squad players, was sent on a season loan to National League Boreham Wood.