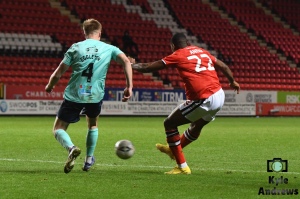 Quite comfortable this afternoon in the end and another four goals scored at The Valley. Great credit to Coalville and especially Charlton fan Jake Eggleton. I hope their supporters enjoyed their afternoon and they win promotion at the end of the season.

I thought we scored that 2nd goal at just the right time, but non-league defending in the 52nd minute offered The Ravens a path back into the game at 2-1, but in the rain we settled down again and following a raft of substitutions got the important 3rd as they started to tire.

That was Jack Payne’s 2nd goal, and third in a week. Jayden Stockley’s header was sandwiched between them and right on the 90 substitute Chuks Aneke secured the victory.

Still a mystery why Jake Forster Caskey had to start on the bench. Conor McGrandles has not shown why he is better. Good to see the two strikers score, and I was impressed again with Tyreece Campbell.

One worry is the injury to Terell Thomas, who went off injured in the first half. Young Zach Mitchell replaced him.

A crowd of just 4,707 with 1,670 from Nottinghamshire saw us move onwards in another cup competition.

Ben Garner: “From our perspective, I thought we were really professional, a good performance. We probably should have scored more goals but other than that, a really good performance and safely through to the next round.”