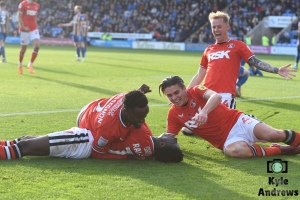 An excellent win that, backed up by a solid defensive display with the two centre-backs dominant.

After two home wins we needed to go to Shrewsbury, which still brings back bad memories of the play-off defeat, and grind out a result against what is always a physical side. And so we did.

I thought Jes Rak Sakyi had turned into Agent Rak Sakyi after those first half bloopers, but he came good when it mattered and was again in the right place on 69 minutes, but this time he put his chance away following a Jack Payne pass.

Payne himself was excellent when he came on for 19-year old Tyreece Campbell, who put in a very lively performance on his full debut.

The game as a whole was finely poised and both sides had spells where they were on top, but I thought the Addicks were more assertive, created the better chances and deserved the 3 points.

Once we were ahead, we managed the game really well and Garner made good use of his substitutions.

Lovely to watch us win at home from the sanctuary of my couch, but super pleased for those hardy Addicks who have travelled the country this season.

Ben Garner: “We spoke about our fans at half time and how we’d be kicking towards them in the second half and we really wanted to give them the three points, so hopefully they enjoyed it and will enjoy their journey home.”