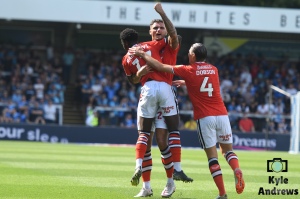 A lively first hour petered out in the warmth today in Buckinghamshire, but it was a useful point.

There are statistics, statistics and damn lies, but that was another game with 60% possession but just two shots on target. I was going to say that this squad needs a striker, but I won’t.

We started well and put an early marker down on the game controlling the ball, but so much of that was playing it around at the back, which only invites pressure. When we do get the ball in promising attacking areas, our decision making is letting us down.

Nonetheless we matched a team that were play-off finalists last season and hard to beat on their own patch. I liked also how we fought straight back after going a goal behind.

Jess Rak-Sakyi equalizing with an emphatic finish in front of a good Addicks turnout in the sun.

Wollacott was called into making a couple of good stops and Dobson was very busy showing that Wycombe were also good value for their point.

6 games is a decent point in time to look at the table. Pompey, Ipswich, Sheffield Wednesday and Peterborough occupy the top four places which isn’t much of a surprise but it is interesting to note that our six games to date have been against teams in the top 12, and four of top 7.

A big week ahead where hopefully at the end of it Ben Garner has more options and weapons.

Ben Garner: “Anything can happen in the closing stages of the transfer window. Any club in the Football League could get a phone call on Monday morning and there is a huge bid in for one of your players and the player wants to go. There’s things that can change and happen so we’ll be ready and we’ll be on our toes. Hopefully we can finish this window strongly and make sure we’ve got the depth and balance within that squad that will last the season, or certainly until January, and make us as competitive as we can possibly be.”