Ben Garner to be appointed. Possibly. 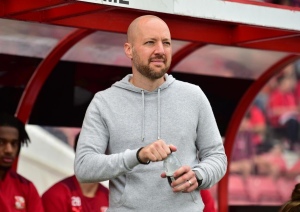 At least according to Rich Cawley, who get’s very little wrong but there are some murmurings tonight that Thomas Sandgaard has denied Garner’s imminent appointment. Nothing is ever clear cut is it.

If Cawley is correct then Sandgaard has agreed both terms with Ben Garner and compensation with his club Swindon Town. I guess we may find out more tomorrow. Possibly.

Tonight’s spanner in the works has stopped me delving too much into Garner’s background. He is a Pembury lad, 42-years old who’s career was ended prematurely by injury and has coached at league level since he was 25. He does appear to come with good standing.

News of Garner’s apparent appointment sent the Charlton faithful into a bout of torpor. I personally didn’t expect Sandgaard to throw bags of cash around and we have to remember what we are, as well as the role that Sandgaard wants from his new hire. That won’t be for everyone.

In just 11 months at Bristol Rovers he didn’t really cover himself in glory, and was sacked with an 18% win rate, but with a good coaching reputation and connections within the game, he got the job at Swindon Town and there is no denying that he had a very successful season considering Swindon had just 7 senior pros when he joined last summer.

Swindon’s possession, passing, attacking and goals stats were very impressive last season and Garner does meet the profile that Sandgaard has described.