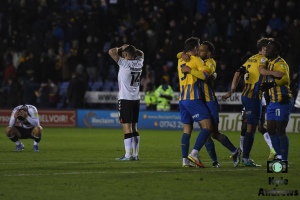 The first defeat under Jacko to an injury time goal that should have never have stood.

It was one of those days. The weather sucked, it was a terrible game, and 1,000 Addicks had to cross hell and high water to get their due to train cancellations. We did not play well, but did not deserve to lose, but lose we did, and now we have to see how Jacko responds.

It has been a disappointing week after the ecstasy of last Saturday. It reminds us of what a dreadful division this is, yet also of our limitations.

We are missing three centre-backs, a right-back and our main striker and top scorer is suspended. Jacko didn’t seem too enamoured with Stockley sat in the comfortable Charlton TV studio. He did let his team-mates down and we need to see a response from him.

The current squad is unbalanced. We have midfielders who can’t even get a game, yet lack strikers and defenders underlining the cock up of our summer transfer dealings.

I thought Clare did well again today but we missed Purrington’s intelligence in getting into good advanced positions. Souare was poor and we were very lightweight especially up front. Davison has failed to take his chance, but in fairness service into the front two was meagre. It was either tentative or off point and every cross was down the throat of Shrewsbury’s first line of defence. We desperately needed more care and ideas from Lee and Gilbey today.

A frustrating afternoon, but we didn’t deserve to lose. the referee was poor and should be embarrassed when he sees back the challenge on Dobson on the edge of the box before the ball fell to Udoh to score in the 93rd minute.

Still today was miles better than the car crashes we witnessed under Adkins. I’m happy to wait for Thomas to make his decision, but cut the spin and name dropping, it does not do you any favours.

Thomas now heads home and Jacko has a chance to use two cup games to bring a fresh desire from the players, resting one or two along the way.

Jacko: “Yeah, it was probably a foul. He was giving those fouls all day long. He’s nudged Dobbo in the back, it’s an easy one to give. I thought he gave those types of fouls all day long, so for him to not give it at the end is a bit bizarre. We’ve still got to deal with the situation. You have to deal with balls into the box, especially at that late stage of the game where you have to have that killer mentality. We switched off for a second and it has cost us.”