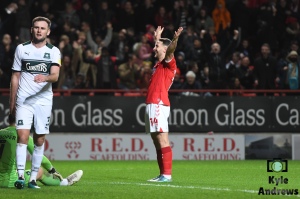 Well that sent a shot across the bows for those in the table looking down on us.

What a performance. What an atmosphere. What a day. I have long since stopped pinning my hopes on a Charlton game headlining a trip home. I try to compartmentalize the 90 minutes as part of a whole day out with family and mates. Wake up on a Sunday morning a bit worse for wear, and consign the football to lower down the memories of a fine day out, but bloody hell yesterday’s ‘hour and half in the middle’ had bloody everything.

Beforehand in the pub we were all very aware of Charlton’s regular virtue of blowing the chance to shine on the big stage. Falling over on the big occasion in front of an audience of strangers, the easily impressionable and an expectant full house.

Nonetheless top marks, 10/10, 100%. A performance of everything you ever want from a Charlton side, and more besides.

I going to have to park this comment at some point, but I feel that Thomas still needs some encouragement….. how impossible is this the same squad of players that Thomas’ first choice Nigel Adkins managed up until just a few weeks ago?

From the first whistle Jacko’s team were at it. Surging forward in numbers, pinning the league leader’s back, winning corners, DJ terrorizing his opposite number. Plymouth looked terrified, their fans stunned. Wave after wave of high press and attack.

That pace did slow down and in all honesty we didn’t have that many real scoring opportunities, and Plymouth did look dangerous on the break, and certainly MacGillivray would have had dirtier shorts at the break. Argyle are top for a reason and their front two were lively.

In contrast our front two – Davison and Washington were not involved enough, especially the latter.

Ryan Lowe would’ve have been encouraged to get his team in at half-time level and having survived the early shellacking. The half-time talks of the two managers, who are mates, crucial.

2nd half whistle. Once more a tidal wave of red shirts crashing into the penalty box at the end with the bank of the Covered End high behind it sucking the ball towards them, baying the home side on.

Washington and Davison suddenly causing all sorts of angst amongst the league leaders who had not lost since early August. Gilbey and Lee careering forward, Purrington lurking high up the field on one side, DJ on the other covering acres of land and George Dobson patrolling the midfield like a starved guard dog.

The Valley was as someone one said ‘bouncing.’ A wall of noise on three sides of the ground, songs new and old loud and echoing around the famous stadium.

Then on the hour, a short corner saw Dobson put in a deep cross and there of course was Purrington to control the ball and sweep in low and hard at the near post. SE7 erupted.

1-0, but Plymouth were not out for the count. Pearce was already off with an injury, Gunter on in his place making the back five even more makeshift, but they stood tall, with Famewo particularly inspirational.

With 7 minutes to go Lee swivelled away from a challenge with the ball in his own half and played an inch perfect pass into Washington’s path who moved menacing into the box and dispatched a finish of top quality to make it two. He stood arms raised in front of the Covered End with a smile as long as the Blackwell Tunnel.

Game over as The Valley rocked. Still we attacked and both Lee and Washington could have added more gloss to what was already a top, top win.

Also, in that six minutes of injury time there was a moment when Plymouth had the ball outside of their box beaten and shell-shocked, and I counted five Charlton players press them further and further back chasing and harrying as if it was the first minute.

That was the memory I woke up to this morning. In my head the sight of those Charlton players giving everything in the red shirt. That and a hangover, oh and a very croaky voice. Great day.

Jacko: “I believe in these players, I believe in these supporters and I believe in this football club. We can do something special together, I truly believe that. I know what can happen. The players have set a standard now and they can’t come off it because they’ll be cheating themselves if they do.”