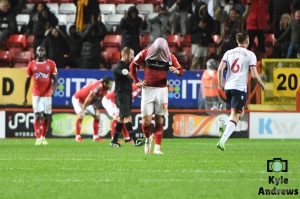 No way back for Nigel Adkins now surely.

After Adkins made his 23rd team change in four games we started well. Davison finished clinically from a Leko cross and those two supported by Blackett-Taylor and Lee actually aroused the senses for 30 minutes, but we ran out of legs and ideas and Bolton equalized just before half-time with another long range pot shot with Matthews again culpable.

Half-time and all to play for, but for the love of god what does Adkins say to them during the break?

I have most definitely seen us play worse and not lose 4-1, but I don’t think I have ever seen a Charlton team so unfit, unprepared and unorganized. We lack leaders, a system, belief and frankly the players also look beyond caring.

Let’s not kid ourselves this is a relegation looking team bereft of leadership, direction and heart. We are already 4 points from safety and played a game more. We sit in the lowest league place any of us can ever remember.

Incredibly the crowd stuck with them and Davison and Leko and possibly Lee and Clare until he couldn’t breathe, were exempt from criticism…. so they will be dropped on Saturday, most of the others were hapless or at least spineless.

Adkins cut a forlorn figure soaked on the sidelines and then after. A parody of his cheery morning walk videos.

In the studio Curbs and Dean Kiely were politely but openly critical in their conclusions. Curbs talked of what he would do when we were near the bottom of the Premiership. I almost cried. What did we all do to deserve this?

Thomas needs to show some leadership and make a change quickly and decisively because this is not going to get any better, and sadly I think this shit show goes beyond the manager with the owner not immune to having fingers pointed in his direction.

I just don’t know if Sandgaard will admit to a mistake though. He was so gung-ho when he signed up positive Nigel after Ged set up the call-in details. Nigel interviewed like a dream on a Zoom video, but sadly he has not lived up to expectation off it.

Mr Positivity: “In the last 20 minutes trying to win it we’ve let the game go away from us with some poor goals. They’ve got a couple of ricochets in there as well but that was a challenging bit.”