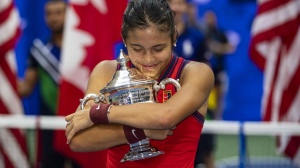 When I was 18 I was in Henry’s in Bromley drinking beer, trying to chat to girls and get Scott Minto’s autograph.

Emma Raducano’s achievement tonight of becoming the U.S. Open champion is quite mindboggling. She came from out of literally nowhere. Just 18 and with a youth tennis path so different to child prodigy’s we have seen in the past.

The first ever Grand Slam champion to come through the qualifiers where she had to play three games in three days, then seven further matches, all without dropping a set. A fantastical achievement.

I hope both her and Leylah Fernandez become two players that we see at the top for many years to come.