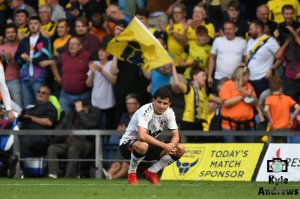 I’m not one for looking at the league table or casting season-long aspersions after three games, but I would like to see a glimmer of possibility, a framework, a promising player, a style of play, but today was again poor.

After a pre-season of much hype of player acquisitions, a defined style of play and rock n’ roll what has been served up so far has been pretty uninspiring. We were a long way second-best today, overrun in midfield, error prone in front of our own goal and bereft of attacking ideas…. the long hoof in the general direction of Stockley’s head will become very tiresome, very soon.

We are so short of quality, even L1 standard. Oh for crocked Chuks on the bench. Charlie Kirk was understandably given more time off to mourn the loss of his father, so 20-year old Charlie Clayden got a few minutes as part of Adkins’ pathway to the first team project. He was better than DJ though who touched the ball 7 times in 63 minutes according to people that count these sort of things. Had to be better than watching. The stream was a full couple of seconds behind the commentary, so we got to hear about Oxford scoring twice before we could see it. It was not a good day.

This is a huge season for Albie Morgan, but I tend to back Bowyer on this in that he is better as a holding midfielder than a 10. Morgan ballooning over the bar in injury time may become the season trademark.

I do hope not, there are 9 months to go and a million games, but we need more players and frankly Nigel Adkins needs to do a lot better. Big game on Tuesday.

Mr. Positivity: “There’s several situations we could have done better with. We get ourselves back in the game, we had little spells, they had spells. It was very stop-start the game for me. I’m really disappointed that we didn’t get anything from the game.”