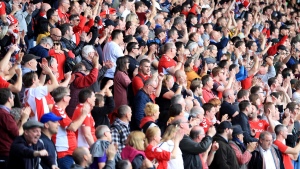 Lee Bowyer touched on a topic many of us have highlighted as a problem today, and that is our miserable home form.

By my calculations under Bowyer at The Valley since he took over with fans in the ground the Addicks won 26 of their 46 league games that were played. That does not include play-off’s, or games this season with a small number of socially distanced fans allowed in.

You can of course manipulate a stat anyway you want but some stand alone and there is absolutely no doubt that in a cavernous ghostly Valley, Bowyer’s team have really missed having Addicks’ inside to cheer them on.

The mark of a Bowyer team has been high press, high energy, blood and thunder. Fans rise to that. I wrote after he won his first game at home to Plymouth that “we played like a team of Lee Bowyer’s.”

This is not a post on what his team has become now, that has a little ways to run, and will come due another day, but show me a Charlton fan that has not enjoyed the journey under Bowyer when you could pay to watch them in the flesh from that first game with him charge nearly three years ago.

Now don’t get me wrong in my coming up to 50 years of going to The Valley there have been many, many times when you could hear a pin drop, peanut shells falling onto that gigantic terrace would echo, a seat crashing backwards vibrate in the Covered End amongst an eerie silence.

Yet for me when Lee Bowyer becomes an ex-Charlton manager one of my fondest memories will be the noise The Valley created when we drove and screamed them on in every situation. It may not always seem like it, but there have many great memories as a Charlton fan, but in those 47 games (I have to add the Donny play-off game ☺️) there was more than a fair share of hair on the back of your neck moments.

All fans can rightly claim that their teams have missed them, and I think that is even more applicable to those sides that play in the larger stadiums, but I’m going to stick my neck out and say a Bowyer team, trademarked by the bond that was mutually created, have missed them more than most.

It goes without saying that if this Bowyer team is going to write another successful chapter then that home form somehow has to be recreated. Starting Saturday.