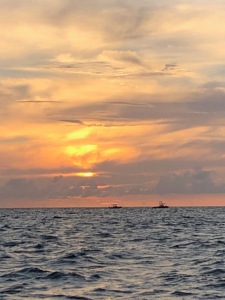 Bermuda’s airport re-opened last week, but I am in no rush to get on a plane. Lockdown has had me constantly thinking of travel, past trips and what future ones look like. I also realized that I never did write about the families trip to the Florida’s Keys at the end of last summer.

The Florida Keys are a coral string of islands that form the southernmost part of the United States. The iconic Overseas Highway runs from Miami to the bottom tip of the keys at Key West. American Industrialist and important developer of the Atlantic Coast of the state of Florida Henry Flagler attempted an ambitious plan to run a train the 160 miles across the 800 islands from Miami in the early 1900’s.

Flagler’s aspiration was to take advantage of the growing but geographically challenging trade between the U.S. and Cuba and the rest of Latin America. Yet despite some innovative engineering, the railroad was continuously hindered by a run of hurricanes but engineers persevered until the Labor Day Hurricane of 1935. This CAT 5 devastated the Keys and killed 400 people.

That was the end of Flagler’s project, yet many of the track beds, trestles and bridges remain and form part of today’s Overseas Highway. 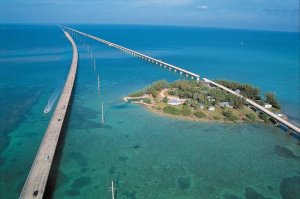 The Keys are split into the Upper Keys, Middle Keys and Lower Keys. Key Largo is the largest town in the first section, Marathon is in the Middle Key, and this is where we based ourselves at the Isla Bella Beach Resort, which sits at the foot of the epochal 7 Mile Bridge (right).

Set on 13 islands Marathon is the third largest town in the archipelago and is a large fishing community where Marina’s, water sport rental cabins and beachside bars and restaurants are plentiful.

Marathon derives much of it’s livelihood from the ocean and boasts endless boating options including deep-sea fishing off the translucent isles. There are big fishing competitions all year round and the bountiful reefs make it a popular diving and snorkeling destination. Spearfishing, reef fishing and apparently catching lobster around these parts is like shooting fish in a barrel!

There is also a myriad of sightseeing boat cruises and we used Sea Squared Charters for a jaw dropping sunset cruise. 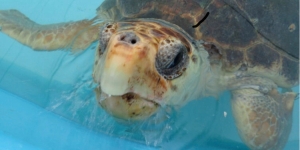 This whole area is very family friendly. The outdoor Florida Keys Aquarium Encounters is very hands on with plenty of touch tanks for kids to bury their fingers in. The Turtle Hospital complete with a turtle ambulance has tours of the ‘hospital beds’ to visit the hundred or so turtle residents being cared for at any one time. This is turtle city down here with loggerheads, hawksbill, the huge leatherbacks and green turtles all common. The rarest are Kemp’s Ridley’s and despite the Keys’ natural environment many predominately preventable threats exist to the future of these majestic reptiles.

To get a sense of the history of the flawed Overseas Railway there is a museum at the stunning Pigeon Key only accessible by ferry.

We debated staying at the famed Key West, but decided somewhere more central and pedestrian suited what we wanted. Nevertheless Key West is the big draw down here, and we set off early one morning across the 7-Mile Bridge for a day trip returning later than we anticipated. 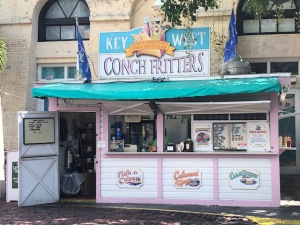 Key West is party central and the most southern located city in the country and therefore a long, long way from sanity and even though we were there in quiet season you could feel in the air the anything-goes atmosphere.

Amongst the garishness there is a lot to see and do down here, although for most people it is the garishness they seek. The night scene is one of legend and wild chickens and stray dogs mix with drifters and hippies. Tattoo and t-shirt shops line the pavements around Duval Street along with hole-in-the-wall late night food stop off’s.

Okay, that is one side of the Key West coin, but we found the flip side too. As we had just the day to explore we did what we normally do and took a jump on-jump off tour around town, this time by Conch Train where we got a narrated tour of the cities tawdry past and architectural history. 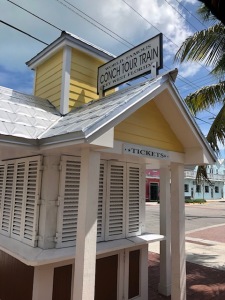 The Conch Republic is a self moniker down here, they have their own flag and everything, and you can see reference to it everywhere, and you can eat the shell-like mollusk until your hearts content. Better deep-fried than sashimi though.

The Conch Train began in the Old Town at Mallory Square, a disembarkation point for visiting cruise ships. It has all the pre-requisite feature therefore of doughnut shops, street acts, craft vendors and some places that I couldn’t dare tell you. Mind you the unbelievable sunsets at the pier here are the main act.

Places of interest on the tour were Harry S Truman’s Little White House Museum, the former president’s summer home built in 1890. The Mel Fisher Maritime Museum showcases the loot discovered at the bottom of the ocean in the 1980’s from two Spanish Galleon’s that failed to make their journey from Havana to Spain in 1622. Included in the stash is a 77-carat emerald crystal worth $250,000. Key West Lighthouse is open to climb the 88 step of the steel spiral staircase for one of the best views of Old Town.

The Custom House art galleries and The Yacht Club are worth a nose, but probably the best tourist stop of all is Ernest Hemingway’s Home. Hemingway wrote most of his life’s work whilst living here, and the 30-minute tour was anecdotal and humourous. 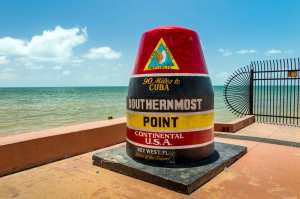 Randomly I’d recommend the City Cemetery which contained some dead funny epitaphs! Then after that there was plenty of cheer at the Green Parrot Bar, the town’s oldest tavern.

Fishing is life down in Key West and we spent ages watching the fishermen bring in their catch at Key West Bight, and then it was off to dinner to sample some locally caught fare at Nine One Five. It was too hot to sit in their twinkly lit garden, but the food was great, the soul mama seafood soup in particular.

Before we got out of dodge we paid a visit to the most photographed site in the Keys – The Southernmost Point marker where we took our turn to have our photo taken next to the massive striped buoy.

Back at darkness then to our hotel, which had only opened a few months before we got there. The Isla Bella occupies over a mile of waterfront. Low rise with contemporary rooms with numerous pools dotted along the sand outside each one. There was a ton of activities available, most of which are free. We biked I think almost every day and kayaked a few times. There was a spa on site and a mini supermarket. I have to tell you though that the sargassum seaweed was often overpowering and put us off going in the sea. 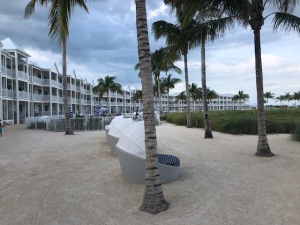 Marathon’s restaurant’s didn’t do it for me. We sweated our asses off at Sunset Grill on the water next to 7 Mile Bridge. The margarita was tasty, the food wasn’t. We were a big fan of the restaurant in the hotel. Not quite sure of the Italian mailman connection, but Il Postino with it’s design yourself pizza’s and sundae’s was a hit with our daughter, and the pasta’s were first class.

I have been all over Florida, but never down this far, as far as you can get in fact, apart from a US Naval base satellite dish just off the water. The journey down here from Miami can be horrendous. It is only 160 miles to Key West but it can take a whole day. Our drive was pretty easy though, the humidity of August making it one of the quieter visitor months.

The drive down this narrow coral archipelago is engrossing with the Gulf of Mexico to the west and the Atlantic Ocean to the east. Plan some stops in between and as you’ve come this far, you may as well carry on down to the funky madness that is Key West, the Conch Republic.