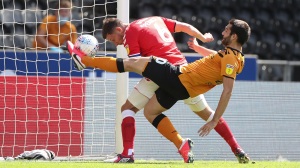 A massive win with real positive early signs that Lee Bowyer has re-ignited all the character traits that we have come to admire.

I watched the game on Valley Pass and think because I was fully submerged in it didn’t really miss the crowd, although the players entering the pitch like they had come for a kickabout was very strange, only added to by the fact I had no commentary for the first few minutes. The silence was very eerie.

We were definitely second out of the blocks as Hull won a couple of early set plays, but in an unfamiliar 4-4-2 we got going with Albie Morgan at the centre of most of it.

Leading up to our goal we had started to move the ball well and were more threatening in their third. A good move led to McGeady’s shot pushed over and from that corner, Hemed flicked on at the near post, their ‘keeper palmed the ball further across the goal and Pearce beat two Hull players to head home.

The whole squad spent the night together in Hull except for Pearce, who’s wife is due any day. The skipper drove up to Humberside early morning to join the team. Pearce stood tall today, wanting to wear to shirt, fighting for every ball, and wearing the captain’s band with pride.

It’s quite simple in my mind. Those teams that adapt, are together and are committed will succeed in this 9-game season. You need more than that over 46 games, but over 9 games in these surreal surroundings I reckon that will decide champions, promotions, relegations, play-off’s and cups.

Straight after our goal we almost scored again. It was a lovely move. Oshilaja‘s cross whipped across the goal, and Bonne was a toenail clipping away from putting us two-up.

Early second half Hull threw on three subs including Josh Magennis who began lively. Yet Bonne had a free header when Alfie Doughty who was on for Morgan had a brilliant run and put a cross on his head, but headed wide.

Hull started to put the ball long, but although we were happy to soak up the pressure, we didn’t sit deep, and when Jonny Williams and Chuks Aneke joined the fray we has two very good outlets. Aneke is bigger than I remember but mobile and burst into the box leaving the Hull player blowing, but Cullen shot over.

Field was on to shore up a midfield as we entered the final stages, although we all knew that there would be the obligatory added time plus drinks breaks.

We were pretty comfortable – I can say that now of course 😅 – but Hull’s best chance came when Samuelsen shot straight at Phillips.

Five minutes of added time past without incident and that is a huge 3 points.

No one could really predict the starting line up, but Bow surprised with the formation, Oshilaja at left back, and with Morgan starting. Bow explained it after and was rewarded with impressive and something-to-prove performances from Morgan, Hemed, Oshilaja, McGeady and Aneke.

Pearce and Lockyer were immense and Pratley and Cullen the fittest players on the pitch. It is only a start, but it has filled us all with belief and pride.

I hope you enjoyed that Seb 🙏.

Bow: “The good thing is if you can get off to a winning start, now we are out of the bottom three, it’s in our hands.”
Their bloke: “We had probably three times the penalty area entries that Charlton had and when you have that you’ve got to score. We didn’t seem to get on the end of any cross or any ball that dropped in the box.”
Elsewhere: With just one home win in the division, Barnsley had a big win at QPR, Wigan won 2-0 at Huddersfield, Luton equalized late at home to play-off chasing Preston and early in the day Middlesbrough went down 0-3 at home to Swansea.