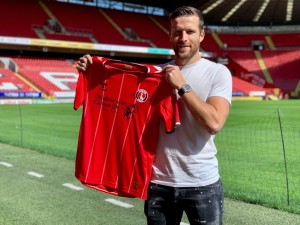 Pah to the transfer window. Lee and Steve go on. Today 27-year old Welsh right back Adam Matthews signed a one-year deal after a successful trial.

Matthews played 28 games for Sunderland last season, even appearing in their final league game. He left in the summer due to his high wages, one of many still at the Stadium of Light signed in Premier League days. Sam Allardyce signed the then 23-year from Celtic for £2m in 2015, but within weeks Allardyce had gone and David Moyes was chosen. Relegation came next and four further managers, and a another relegation for Matthews to work under.

Hopefully surrounded by Welshmen Tom Lockyer and Jonny Williams plus Beram Kayal, whom he played with at Celtic, Matthews, another with something to prove, will find some stability and better fortune in SE7.

Matthews likes to attack, so represents a good option at full, or wing back for Bowyer. I saw many say that Deji Oshilaja would have been a comfortable step in for Solly when required, but I am sure Bowyer has grander plans for Deji, who as the season moves forward, we’ll see plenty off. Welcome Adam.

Steve Gallen said: “He’s a good right-back who is very attacking and loves getting forward which is something that Lee was keen on in particular.”

Like Loading...
Tags: Adam Matthews, Chris Solly, Deji Oshilaja, Sunderland
From: Charlton, Transfers
← Just the one out on loan
International drive →
No comments yet