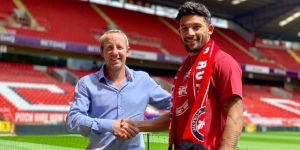 A surprise signing today down in SE7. Macauley Bonne, Leyton Orient’s top scorer from the last two seasons, 49 goals in all. Even more surprising was there was a fee. Lee Bowyer indicated that RD maybe prepared to offer small fees on players, where there is future value.

Bonne signed an extension to his O’s contract last summer and it is thought that there was a break fee of £200,000.

The 23-year old was born in East Anglia and was in Ipswich’s academy. He also briefly played for Norwich’s youth team before making his professional breakthrough at Colchester. Bonne had spent two season at the O’s where he has been carefully watched by Steve Gallen.

He two caps for Zimbabwe, the birthplace of his parents, but did not make the squad for the upcoming Africa Cup of Nations.

It’s a big step up for Bonne, but another striker has been added to the squad and Gallen has more than earned our trust in picking players.

More importantly to me is that despite the ongoing shadow over of us regarding Bowyer’s future, he and Gallen are continuing to work on their plans for next season. That has to be a good sign.