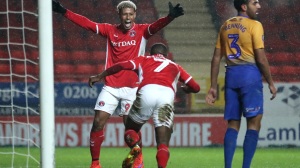 We showed once again tonight that this Charlton team has goals in it as we crashed five past Mansfield Town to progress to the next round of the FA Cup where we will travel to Doncaster Rovers.

We began with a strong looking line-up which included Billy Clarke and Patrick Bauer. Both were replaced late in the game, after we were 2-0 ahead. One surprise in the starting line up was the inclusion of Lyle Taylor, who had only just flown back from Montserrat. Sarr partnered Bauer, and Toby Stevenson got a whole game in his preferred wing back role. Phillips was in goal.

Fosu, Lapslie, Pratley and Clarke were the diamond shaped midfield and Ajose, desperate for a goal and possibly in Bowyer’s last chance saloon, played up top with Taylor.

Well Ajose got his goal, and two assists, and Mark Marshall also got a confidence boosting goal after he came on as sub. The hero of the hour and a half was Lyle Taylor who hit a hat-trick. Clearly showing no signs of jet lag he dispatched two close range finishes and a perfectly measured lob.

Not as comfortable as the scoreline suggested and over two games Mansfield have proven their promotion credentials. Nonetheless no one ever luckily won 5-0 and vindicates the 1,700 or so Addicks who, better men and women than me, got off their arses to watch. By the way the crowd of 1,910 probably the lowest home FA Cup attendance since we played at Mountsfield Park.

Addicks at The Valley: Doctor Kish;
Bow: “I just said to the lads ‘Yeah, I’ll praise ya but trust me, that weren’t a 5-0 game, so don’t get too ahead of yourselves.”
Elsewhere: Donny were 5 up at home to National Northern League side Chorley before half-time. That ended 7-0. Ebbsfleet went out to Cheltehnham and Aldershot lost on pens to Bradford. One other noticeable result was at Crawley who were drawing 2-2 with Southend at the end of 90 mins, and then Chris Powell’s side scored 4 in ET to win 6-2.