Nahki Wells back with a bang 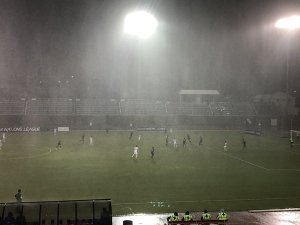 Bermuda caused a big upset last night by beating El Salvador 1-0 in a rain soaked National Stadium. Nahki Wells scored the 2nd half winner on his first appearance for his country in 3.5 years. El Salvador came into the CONCACAF Nations League Qualfying seeded 4 out of 34 countries and 110 places above Bermuda in the FIFA rankings.

The conditions were shocking but helped neutralize El Salvador’s technical superiority and after Wells, who is on loan at QPR from Burnley, headed in Reggie Lambe’s cross the Gombey Warriors hung on for a famous win.

There is now a big possibility that Bermuda might qualify for the CONCACAF Gold Cup for the first ever time. The Gold Cup is the Caribbean, Central and North American equivalent of the Euros and will be held next year in the USA.

Bermuda now lie 5th in the Nations League Qualifying table with the top 10 joining the six pre-qualified nations of USA, Mexico, Honduras, Costa Rica, Panama and Trinidad and Tobago in the 2019 Gold Cup. It won’t be easy though as Bermuda play away at Dominican Republic in their final game and will probably need to win.

Meanwhile Lyle Taylor captained Montserrat to a 2-0 victory in Aruba. Taylor didn’t score but did play the whole 90 minutes.