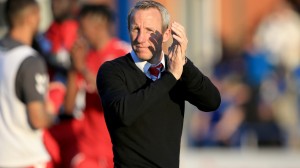 The sadly anticipated morning after the evening before. I hope Addicks’ fans all got home safe and sound, I understand it was a bit hairy during and after the game. Superb support from Charlton fans again though, a resurrection of pride that can be put solely at the feet of Lee Bowyer, who spoke again very well after the game.

It continually surprised me that we clung on to any play-off hopes during Karl Robinson’s reign. We didn’t win from the middle of November through to January and when the season hotted up in February and March we won just once, away at relegated MK Dons. It was pretty desperate at times as Robinson stuck to a plan that clearly wasn’t working and although the finger should always be pointed at Duchatelet and ex-CEO Meire for not giving any manager or head coach a base or confidence to which to build from, Robinson was given a lot more to work with than his predecessors.

Yet, despite picking up a fair number of his loudly earmarked targets Robinson built a powder puff squad short on goals, creativity and power. We were never consistently good enough to go up and once Holmes took the Sheffield United option, Billy Clarke was ruled out for the season and Duchatelet only sanctioned strike force recruitment as inexperienced loans, then the story was already written.

That Bowyer and Jackson managed to get us into the top six with the run of end of season games we had was nothing short of a miracle, yet as many of us prophesied, we didn’t score in the two-legged semi-final and were soundly knocked out within a week of making it.

I don’t know if Bowyer will make it as a manager, there is a lot more to it than he has witnessed these last couple of months such as reporting to a CEO. Also, in the time Bowyer was in charge it was all a bit crash, bang, wallop with no time to breathe. A summer of planning and assessments backed by a supportive owner will allow him greater scrutiny to plan and assess what is required to win promotion over a nine month period, not two.

What he lacks in experience he makes up for with a will to win and a competitive spirit that we saw in everyone of his over 500 club appearances, the majority in the Premier League. Those craving a manager that knows the league and has much experience should remember Russell Slade.

I agree Bowyer would be wise to surround himself with someone older and wiser that can guide him, but I believe he 100% deserves a chance to craft and put a stamp on a Charlton team under new ownership.