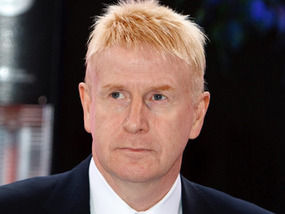 Andrew Muir is a name linked with a takeover of Charlton back to last October. More recently it was thought that an Australian bid was still very much in the picture, albeit balking at Duchatelet’s inflated price.

Today Rick Everitt produced an excellent investigative piece for VOTV giving not only a much desired ‘takeover update’ but also gave us some explanation to why ex-Rangers director and turnaround businessman and accountant Donald Muir (photo) was at the Oldham game on Saturday sat next to Alex McLeish.

McLeish was also at the game last night, I guess someone had to be, this time sat next to Barnet manager Mark McGhee.

It would be no surprise if Donald Muir and McLeish fronted a takeover for some overseas investment but they wouldn’t have the money themselves. Certainly Donald Muir has nowhere near the funds of his namesake Andrew. It humours me that almost anyone can be linked to buy a football club, but less funny is that finding the right buyer with funds, ambition, and acumen is a lot harder.

The good news is that there are parties out there interested in being owners of Charlton Athletic and Roly wants to cut his ties. The bad news is that any takeover ain’t happening anytime soon.