No tears spilt for Fulham 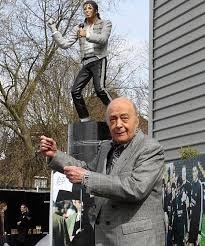 “All aboard the CAFC party boat to Fulham” – Johnnie Jackson

My disappointment at seeing Birmingham avoid relegation soon evaporated after hearing of Fulham’s demise at Stoke City. They were truly awful yesterday and after 13 Premiership season’s they will join Cardiff in The Championship next season.

I have long had an irrational dislike of Fulham, who were transformed from a community, family club with a rich history into the egotistical face of Mohammed Al Fayed, who over time squeezed every ounce of individuality out of the club and it’s famous ground. Michael Jackson statues and neutral areas just two examples.

It wasn’t always like that, I remember vividly my Mum’s first ever Charlton game in 1976, drawn to The Valley not by an afternoon with my Dad and I, but by a Fulham side that included George Best and Bobby Moore, and a trip to the Riverside used to be one of my favourite away days.

Al Fayed contrived to change all that and his final act was to sell the club to Shahid Khan for £200m. Roland Duchâtelet spent £14m on Charlton. Who got the best deal?

Felix Magath and Khan now how a big squad of overpaid underachievers to deal with, and this movie has been shown before.

Vincent Tan has written a whole new book on football club ownership and Cardiff and their lucky red shirts will re-join The Championship after a calamitous single season. Whether Tan will stick with the untested Ole Gunnar Solskjaer or not, I’m sure we will find out on the back papers soon enough.

I have never been much of a lover of Birmingham City and their inhospitable fans, but my real disappointment was that their survival meant that the division lost three of it’s smaller clubs with budgets amongst the lowest five in the division. Blackpool and Charlton were the other two.

Wolves no doubt will rekindle their big club attitude next season and will attempt to build on the terrific job Kenny Jackett has done there and I reckon Brentford with bright young manager Mark Warburton in charge will be no pushovers a level up either.

Norwich look dead and buried and then one of Leyton Orient, Peterborough, Rotherham and Preston will come up via the play-off’s and it would be great to see the O’s make it, another old school favourite away day and the last time they were in the 2nd tier? 1981, seems like yesterday.