I know my Canadian readers have been waiting for this! I was in Vancouver last May and it has taken me until now to finish my Travelogue post of this radiant city.

At just 125 years old Vancouver is a baby. Naturally Aboriginal’s trawled this part of the north-western coastline 8,000 years ago breathing in the fresh air, but it wasn’t until the Fraser Gold Rush in 1858 that folk showed any interest in the area when 25,000 men showed up with spades and swag bags. A few stayed and set up home and began Vancouver’s long history of logging. One man in particular called ‘Gassy’ Jack Deighton established a ramshackle tavern around the inner harbour of Burrard.

A steamship operator from Hull, Gassy Jack was quite a character and loved by the locals the area around his boozer was quickly named Gastown, as it is still today.

The Canadian Pacific Railway eventually linked Vancouver with the rest of this vast emerging land but there was a mini set back in 1886 when the growing community suffered a major fire, and with most of the property naturally built of wood, it caused major damage. However it was the signal for a rebuild and another growth spurt as the world wars sparked shipbuilding and armoury industries diversifying the economy away from logging.

I decided to start my own exploration from my hotel on the waterfront south-easterly towards Gastown, named after Yorkshireman ‘Gassy’ Jack to see what I was all about.

Gastown, and in fact Vancouver as a whole had a pretty gritty upbringing but you wouldn’t believe it as the cityscape shimmers with glass skyscrapers and prettified neighbourhoods. Gentrification did take a while to find Gastown however as it sank into a long decline only halted in the early 1980’s.

The first thing I came across halfway down Water Street was a kitsch clock tower supposedly modelled on Big Ben. It looked nothing like the iconic London landmark but that didn’t stop camera wielding tourists snapping away at the clock discharging from somewhere inside it a river of steam accompanied by shrieks of whistles. I didn’t understand the significance but further down the road I found who I was looking for. At Maple Street Square I was met by a statue of old ‘Gassy’ Jack himself stood atop a whiskey barrel (photo).

Jack would have been proud of the selection of watering holes in his old manor, including the Steamworks Brewing pub and restaurant, Six Acres and the Alibi Room, owned I read by a Brit.

Chinatown wasn’t much to write home about. Maybe I missed something but it appeared to be badly affected by the proximity of the Eastside neighbourhood, a known ghetto where crime has overrun it for many years.

However I was encouraged to explore it by reading that there was a rehabilitation underway but I dwelled on the corner of East Hastings Street and didn’t get a good vibe, so I carried on down Main St before being drawn to the sports stadiums to the right of me. 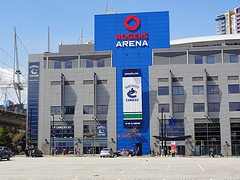 ing my way towards the home of Stanley Cup finalists the Canucks.

Vancouver’s professional hockey team are the big ticket in British Colombia. The Canucks have been in the Rogers Arena (photo) since 1995 but began life in 1945 but only joined the NHL in 1970 but sadly compared to their east coast Canadian rivals, the Canadiens and Maple Leafs, who are the NHL’s most celebrated teams, the poor old Canucks have never won a Stanley Cup.

For the third time they got beaten in the final just last June by Boston Bruins. Tragically the final defeat in this engaging city was met by shameful and nonsensical violence by supposed fans of the city’s favourite sports team. 140 people were injured during a night of riots and looting. Four people were stabbed and nine police officers were also injured, and 117 people arrested.

It was just a couple of weeks after my visit and I watched on the news back at home dumbfounded that people that call this beautiful city home could recklessly attempt to smash it up. This after all was Vancouver, and a more genteel race of people it is hard to meet.

Just behind Rogers Arena is BC Place, a cavernous roof-covered home to Canadian Football League side BC Lions and now also to new MLS ‘soccer’ team the Vancouver Whitecaps, who have been in existence in some form or another since 1973 when during the glitzy NASL days they included Peter Beardsley, Bruce Grobelaar, Terry Yorath and wait for it…. Steve Harrison (ah, Charlton content. Tick).

The day I was there last May, all of the activity around the stadium centered on the finishing line of th

e annual Vancouver Marathon but exactly two years ago BC Place was the scene of the 2010 Winter Olympics.

Both the opening and closing ceremonies took part at BC Place, although most of the activities were being competed for higher up in the mountains of Whistler. Some events did take place in the city though namely the curling at the then brand new 6,000 seat arena (not very originally) called the Vancouver Olympic Centre and naturally the ice hockey at the Canucks’ GM Stadium where the men and women’s gold was one by the host nation.

BC Place is fringed by water and across the creek is the domed Science World and next to that a glass lego blocked hamlet that was the Olympic Village (phot0), built to accomodate 2,800 and officials. The area was originally a vast car park and now the village is still mostly residential but it has been plagued by financial problems and is currently in receivership.

I was then into Yaletown, a warehouse area reinvented like so many of them are and customarily lined therefore with plenty of swanky looking bars and restaurants. I had a walk by the Yaletown Brewery Company, which seemed to be occupied by more drinkers than brewers then I was on Vancouver’s busiest shopping street, Robson.

Nothing took my eye apart from arse-hugging yoga wear shop Lululemon. Vancouver is the company’s headquarters and it’s flagship store is on Robson St. Unfortunately the chief designer wasn’t in for me to thank him.

I had a peep at the city’s leading art space, the Vancouver Art Gallery with it’s 10,000 pieces of work. After 5pm on Tuesdays the gallery just expects a donation and my timing was good so I had a quick scout around and it was worth it, especially some of the gallery’s photographical art. 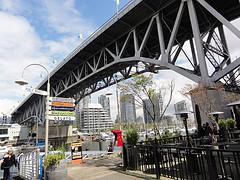 I was then back downtownbut was drawn to the decorative Marine Building, which hugs the corner of Hastings and Burrard Streets. Once, in the 1930’s this 21-story tower was the tallest building in the British Empire and was described by poet and architectural virtuoso Sir John Betjeman as the “best Art Deco office building in the world”.

On my last day I had some time to do a couple more excursions. Firstly I cabbed it over to Granville Island. The small peninsula is a former enclave of rivet and cement manufacturing and the area of no more than half a square mile is dominated by the sky high iron bridge that looms overhead (photo).

Underneath sits Granville Island’s biggest attraction, the Public Market. Inside is a bounty of deli’s and food stalls selling an array of artisan products. The smells were gorgeous and my taste buds and I found it very difficult to pick a place to eat lunch, but we eventually settled on where we could get a table as the Market was filling up quickly with hungry workers and visitors.

To wash it all down, I went to the Granville Island Brewery for a stomach settling pint. This is Canada’s oldest microbrewery and a pint of Brockton IPA did the trick. With little travel companions I may have made a stop in the Kids Market, by all accounts a bristling mini heaven for under 10’s.

ush and I wanted to spend the last couple of hours walking  around the spectacular Stanley Park. I toyed with jumping on a mini ferry which go back and forth across False Creek, some the size of a large bath tub, but I opted for the more conventional taxi and headed for North America’s largest city park.

Stanley Park, named after the chap who also lends his name to Ice Hockey’s most sought after trophy (see above), gives views of every inch of Vancouver from it’s surrounding sea wall. The park would still be a spectacular urban oasis if it was clumsily dumped in the middle of a large conurbation, but honestly berthed at the foot of the mountains with the ocean playing piggy in the middle and with sea planes plunging into the rippling water, it is a dazzling sight.

Inside the park live an estimated half a million fir, cedar and hemlock trees plus an aquarium, swimming pool, restaurants, a farmyard, miniature railway, beaches and a riches of statues, including the famed totem poles (photo) at Brockton Point.

This was a far as I got as my watch moved too fast, the rain started to arrive and my hotel across the harbour became more and more distant.

I had only scratched the surface of the 8.8km sea wall that encircles Stanley Park, but unlike me, if you are in Vancouver make sure you have enough time to stroll, run or bike around the spectacular sea wall, and take a s

Another Kodak moment was the breathtaking views from Canada Place on the North Shore. I would always tend to avoid conference centres (even when I’m on a conference!), but they are quickly becoming blank canvases for some amazing architecture, such as the one in Denver. Vancouver’s sail-roofed landmark has a vista hugging wraparound plaza and a garden on it’s roof. Stroll to the tip of Canada Place and do a 360, you won’t be disappointed.

Vancouver is a city that has moved quickly with the times. Easily explorable in bite-size pieces but with the new comes some absolutely beautiful natural treasures.