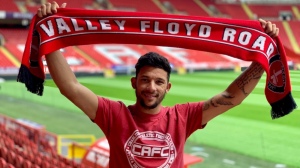 I do think it’s funny. We have the Sandgaard black box and we brought in ace-wheeler-dealer Andy Scott, and who do we sign? An ex-player, who we tried to sign in August and a player we have at least been in for twice previously.

According to the reliable Rich Cawley Coventry City’s Todd Kane, who is predominantly a right back and striker Macauley Bonne, who is now a free-agent, are due to sign for Charlton imminently.

Kane will be a loan, and is out of favour at Coventry. The Chelsea academy graduate had a telephone book of loan clubs before QPR signed him at the age of 26. He made 65 appearances for Rangers, before being sold to Coventry in 2021. He has played 41 times for Cov, 9 times this season. He can also play in midfield.

Bonne will divide fans, he was forced upon Lee Bowyer as a ‘project’ and Bowyer did not stand in the way when we got paid £2m by QPR in October 2022. He did score 11 goals in The Championship for us, but missed many more. Whilst on loan at Ipswich last season he scored 12 L1 goals.

This season he has featured 8 times from the bench before agreeing to sever his contract with QPR becoming a free agent.

Blackburn left back Tayo Edun is another loan possibility.

UPDATE: Bonne signs until the end of the season.