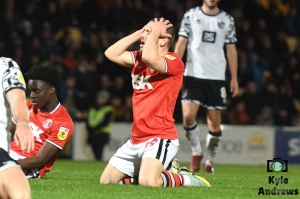 Hands up, and with apologies to those that had to grin and bear it, notably those who were in Staffordshire, I didn’t watch the game. I was watching my daughter at the national schools debate tournament. No passing along the back line, no lack of effort, no defensive cock up’s, no lack of creativity just courageous and passionate kids expressing themselves.

One shot on target and that in injury time yet 64% possession and 405 passes to another red shirt. What is the f$%^&*+ point?

The squad is Mother Hubbard bare, and we have the perennial injury crisis, but surely with that starting eleven with enough options on the bench we have to be better than that don’t we?

This is a desolate time to be a Charlton fan, but all you ask is for some light at the end of the tunnel, some hope to cling onto, but the future looks gloomy and overcast with thunder clouds up ahead.

Garner has to do better with what he’s got, please no more of the ‘we’ve had a great week on the training ground’ show us that you are capable of coaching an enterprising team that can perform, be adaptable and can win a football match. We have won 5 league games all season.

It is nowhere near good enough.

Ben Garner is increasingly pushing the January transfer window envelope down Sandgaard’s throat, a man who has conveniently disappeared off the radar. I’m happy to see Garner do this, but if he worked for me, I would want to be seeing more doing than complaining.

Now a break from the league where we have not won for a month, then December brings five league games. No more excuses Ben.

Ben Garner: “It was horrible, would by my summary. A horrible pitch. A horrible performance. A very disappointing afternoon.”