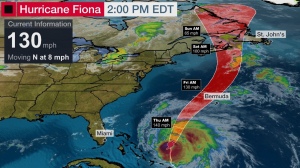 If you read my Puerto Rico Travelogue post from last week I wrote that we were told that a Cat 1 Hurricane hitting the island would mean that the fractured power grid would not survive.

Well, over the weekend Hurricane Fiona battered parts of Puerto Rico’s south and central mountain regions with more than 20 inches of rain and Cat 1 hurricane winds of 70-80 mph winds. The southern town of Ponce measured a gust of 103 mph. Landslides broke out in mountainous regions as waterways breached their banks. In the south-west the Guanajibo River crested at over 29ft washing a bridge away.

Eight people have died, and 80% of the island is still without power. It is an intoxicating and beautiful country and my thoughts are with them.

Hurricane Fiona is now a Cat 4 storm (sustained winds of at least 130 mph) and is making it’s way to Bermuda. Marvellous….

The 2022 Hurricane season had been quiet, until now. Hurricane Earl, blew by us a week or so ago around 100 miles to our east and brought no more than a bad storm, but Fiona is big and currently tracking to be closest to us 6am Friday around 117 miles to our north-west. Fiona does look to be edging more westward, which is good. Nonetheless Bermuda is preparing for 3ft storm surge along its coast and around 18 hours of tropical force winds.

And where am I? In Atlanta, over 1,100 miles away where the sky is blue, the weather hot, and the winds no more than a little breezy.

My hurricane-preparing-other-half always says I am always away when storms hit Bermuda. I’m not sure where she gets that idea from.

I’m Atlanta at a conference until Friday, that’s if the flight makes it back. Popular as always….