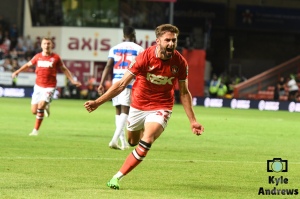 I imagine those that went tonight would have enjoyed that. I did and I was in Tampa looking at ottomans, armoires and chaise longues, from where I was checking the latest score.

Almost as many QPR fans as Addicks at The Valley tonight, so credit to them. The ones we saw on the train back from Preston were very affable although very disappointed in their first day defeat at Blackburn. I guess we are all a little intrigued to see how Mike Beale does there over there this season.

However, a nice psychological boost for us and another step forward on the journey. I liked that we had a go and Garner put a team out to win it, but the boys that came on did themselves no harm at all, and by all accounts a terrific goal by Aaron Henry to rule out a great QPR one ten minutes before.

I believe we were under a bit of pressure 2nd half as Beale switched it up, but to take the game to penalties and then dispatch all five of them is very satisfying. Credit to Wollacott also for making the all important save.

Back to more important league action on Saturday, but with a spring in our step, and with our name in the hat for Round 2.

Ben Garner: “The players are enjoying themselves and it’s well deserved. I thought we played really well. I’m really proud of the group tonight, especially the younger players that have come in and had a taste of it.”