One more in. Scott Fraser? 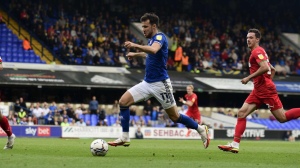 Charlton have been tracking Scott Fraser for a while, in fact even when he was at MK Dons rumours linked us to him.

Now at Ipswich who signed him a part of their massive summer recruitment drive for a ‘sizeable six-figure fee.’ Charlton made their first bid last week, but have had a second improved one accepted by Ipswich.

Fraser has not featured under new Tractor Boys’ manager Kieran McKenna, but the 26-year Scot comes with a good reputation from his time in Scotland, then at Burton Albion and MK Dons. In fact even Ipswich fans appear unhappy about him being moved on. Swansea are also said to have bid for the midfielder.

Fraser has mostly played as a no.10. He has played 15 games this season but close to 300 total in his career which started at his boyhood club Dundee United.

Fraser is said to be in London waiting on a medical.

EDIT: Signed on an undisclosed fee until summer of 2025.