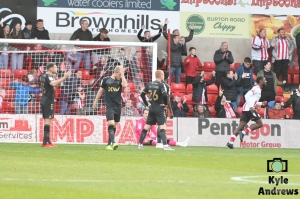 Enough of the excuses. Twelve games and still no clear system or pattern of play. No energy, horribly unorganized at the back, ponderous going forward and overrun in midfield. 14 days on the training ground and Adkins is patently unable to organize, present a vision or effect how we play. Similarly from the touchline during the games.

The players were shocking in different measures. I thought Arter looked at least like he gave a shit, but many of them were worst than terrible. I will also say again that I’ve never seen a Charlton team so unfit.

I watch the games, and the clock just moves forward without us making any impact. The ball is passed around a bit innocuously at the back until we either lose it, or kick it out. Opposing players are left unmarked, crosses aren’t prevented. Midfielders are chasing shadows, and we are never far away from a booking. The ball gets pinged up front, that mostly goes to no one, or if we can keep it, there is no one getting forward to support.

First 15 minutes we were okay – on this basis we will get to the point around December where will have clocked up 90 good minutes in total!

Elliot Lee was central to most of those good moments in the first quarter of an hour. Once he went off, by all accounts ill, we lost all momentum and energy to the point we were happy to go in at half-time level.

We go behind although I thought MacGillivray and Stockley were pretty blameless for the goal, but never mind, just the 25 clean sheets to play-for!

The equalizer at least gave the poor travelling Addicks something to celebrate, but we were straight back to self, and Lincoln should have had the game won before they did in the 91st minute. The complete lack of care or yearning to salvage something in the next 6 minutes of injury time was a fitting epilogue to another rubbish performance.

It is hard to imagine that this abject set of players and a joker of a manager can make this situation any worse, yet I am rapidly coming to the realization that this team can get relegated. There is not one redeeming feature.

I wonder if Thomas is watching the same games. Someone please tell him that we have relegation in English sports.

Mr Positivity: “I thought we were good for 20 minutes.”

Michael Appleton: “I thought we were quite dominant”