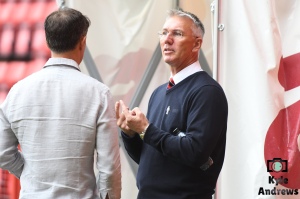 A toothless performance today. Was it terrible? No, but as night follows day we were there for the taking as the game moved into the last 20 minutes.

It was however, another display devoid of style, purpose, organization and hope.

I have seen a lot of ‘worst team in my time’ comments from Addicks. For me that is too early to judge but this is my 46th season and we have never competed at the bottom of the third tier. The shambles Parkinson took down after inheriting it from Pardew still made the play-off’s by 9 clear points in the 2009/10 season. A 4th place finish looks a pipe dream tonight.

Tonight we sit in the 3rd Division relegation zone, no wins in four, no goals at home, hardly a shot on target in fact, no goals in five from open play and a week approaching that is without sugar-coating it, critical.

Nigel Adkins looked a little rabbit in the headlights during the post match, conveniently blaming the WiFi for not hearing Scott Minto’s more searching questions amongst the long hops.

Adkins’ certitude is wearing a little thin, but not as much as his football. That starting XI is awful, but how are we trying to play? What are you trying to get them to do?

We played with two wingers, but how often did they get down to the corner flag? Where are the overloads to get searching crosses in for Stockley, who spent the majority of the game as our only player in the box.

When did we play around there box, knocking on the door, probing for openings? The long hoof is dreadful, but even more depressing is a compete lack of desire or fitness to win the second ball.

The defence has been picked off in every game. Fortunately against Wednesday Bannon fluffed his lines. Gunter at left-back. Christ on a bike. I can’t take that anymore.

We never looked like scoring, yet Wigan could have had five, and big credit Craig MacGillivray for that.

Wigan were deserved winners. Yes they had some game-changers on the bench, and we have players that can’t even change their own underwear. So where does that blame lie?

That is a bloody good question to end on as we sit here wondering if this is another sick joke.

Mr Positivity: “I thought we were knocking on the door but we didn’t work the goalkeeper enough. I know Kirky, there was an opportunity there – maybe if that had just fallen in for us we could have got the rub of the green.”