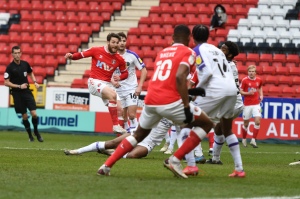 That followed this season’s script didn’t it?

Plenty of huff and puff, the occasional bum off the seat moment, more hands over the eyes moments, saw plenty of the ball, but were sloppy and showed no real goal threat, and then there was another defensive lapse costing a goal.

Gunter has 99 international caps. One of life’s mysteries.

I do get a bit fed up with the obsession of playing Pratley and Watson. They make our midfield so predictable and pedestrian. Away from home for a battling point? I get it. At home to point seeking Shrewsbury? Bewildering.

First half I thought we were alright without looking like scoring. Morgan and Stockley came closest. But we remained patient kept the ball better than recently and moved the ball quickly. We should have created more chances.

2nd half we reverted to self. They scored at a bad time, and had something to cling onto, and then you ever wonder if we are going to get one, let alone two.

Chuks hit the bar when he should have scored, but then Washington got a goal out of nothing. That’s his 10th goal from 24 starts, and is just about our most consistent performer at present.

“I said at half-time go and do what we had done in the first half but we didn’t. We stopped causing them problems and creating chances. We slowed down for whatever reason.” – Lee Bowyer