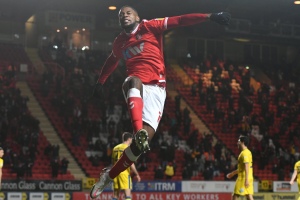 Is this the corner?

After the club appealed Chuks Aneke’s sending off against Blackpool on Saturday – it was in the 85th minute if you’d had already turned off by then. The Football Association’s independent Regulatory Commission have agreed and the red card has now been rescinded.

Aneke has been one of a very slim pickings of plus points this season, but instead of being suspended for 4 games, he is now available tomorrow night.

Question is will Bowyer rest him 🤷‍♂️