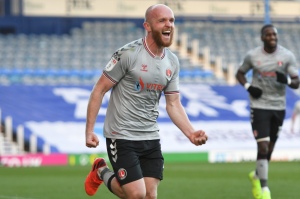 A statement sending victory that one.

The tactics, game plan and the game management spot on. A magnificent defensive display again even with a makeshift back four, which became even more makeshift when Akin Famewo left the field with quarter of an hour left.

Portsmouth on the back of a very good run themselves presented our biggest challenge to date, and although we started slow, we grew into the game with the midfield four of Pratley, Shinnie, Forster-Caskey and Williams peerless, individually and as a collective.

We rode our luck for sure, but the fighting spirit and teamwork warmed the heart at a time and on today in particular where crumbs of comfort are hide to find.

Amos was exceptional, his catching sublime. Matthews ring rusty, but it was good to see him again in an Addicks shirt. I don’t think I realized how tall Gunter was, but what a master of the art of defending he is. Famewo, before he hobbled off, confident and comfortable. Ian Maatsen is 18 and had never played a first team game until the other week. He started sloppily misplacing a couple of passes, but you have to love the virtue of youth. Youth, and talent.

Maatsen’s energy, his smile, his infectious style. He was worth the iFollow fee alone. The 18-year old’s pass for Jonny Williams’ goal was perfect. JFC’s vision and ingenuity to get the ball to him in the first place glorious, and then Jonny, oh how the heart melted when Jonny smashed Maatsen’s cross high into the roof of the net to give us the lead.

We spent large parts of the game defending and beating away crosses, those that Amos didn’t catch but we stood firm with Pratley a rock. The 2nd half became a little bit of a war of attrition, but our game management kept even the most nervous of Addicks’ concerns at bay.

The two subs on 70 minutes were timely and judicious. Bogle once again had chased, harried and generally caused a scene although without looking like scoring, and Williams had just played his best 70 minutes in a Charlton shirt for an age.

On came Paul Smyth and Chuks Aneke who instantly gave us a renewed dimension. The fine line of our lead broadened as Aneke and Smyth explored new areas of the pitch using their pace and guile with the help of a replenished Shinnie, JFC, Matthews, Washington and Maatsen.

Aneke had already had a shot saved after he burst into the box, but a few minutes later Smyth had the ball out wide and delivered an inch perfect cross for Aneke to head home with aplomb.

2-0 and the next door neighbours are still wondering what all of the shouting and screaming was about.

Bow’s thoughts: “I’ve got to say that Chris Gunter was absolutely outstanding at centre-half. He slid in there as if he had played there all his life.”
Photo credit: @K_AndrewsPhotos