Alfie out for 4 months 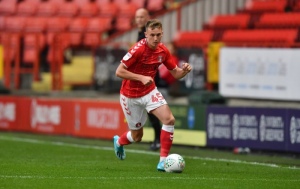 Devastating news for Alfie. A torn hamstring and surgery will mean the 20-year old will be out until well into the new year. Gutted for the young man and I wish him a speedy recovery.

For a 20-year old who was playing for Bromley a year ago, Alfie has made himself pretty irreplaceable down that left hand side for us.

I am sure he will be looked after by the club and he has the character to come back fighting fit, but following on from all of the transfer speculation it shows how fragile a footballer’s career can be. It would be a boost for all of us if Messrs Sandgaard and Gallen sit down with him during his rehabilitation and offer him a new contract.

Alfie has that old fashioned touchline hugger about him…. my mind instantly throws up an image of Colin Powell, although Paddy never tackled. Bow would hate that!

Alfie hangs so close to the touchline that often the ball would go out of play, but he’s a rare breed in that he’s a modern player who when he has the ball is intent on getting as far into the opposing half as possible. We will miss both his pace and his directness.

Paul Smyth I assume will take that role, he isn’t as quick or will score as many goals, possibly, but he has better close control and always wants the ball. I’ve liked what I’ve seen of the QPR loanee so far.