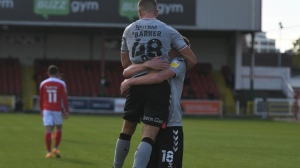 Friendly, kick-about, run out, cup tie.. whatever you call it, it was a nice confidence booster for Lee Bowyer and his team today.

In front again of Thomas Sandgaard plus his family, Bowyer put out a team capable of winning the game but it still included 17-year old Charlie Barker and 20-year old James Vennings.

Ben Amos started in goal with Ashley Maynard-Brewer on the bench with Dillon Phillips told he either commits to the club or doesn’t play. The Addicks lined up in a fluid 4-3-3.

And we won, remember that? Charlton progress to the next round of the League Cup for the first time in three seasons. Macauley Bonne got a cracking opener to have us lead at the half. Swindon improved after the break when Jonny Smith came on for the Robins, and he equalized for Swindon midway through the 2nd half.

However substitutes Alex Gilbey and Chucks Aneke swung the game back our way, and young Barker capped an impressive display when he headed home an Aneke flick-on from a free-kick and then Aneke himself slammed home after in the final minutes after a nice passing move set him away into the box.

Whatever we called today, a win was a much welcome shot in the arm as Bow works out how he can add some players and Thomas Sandgaard extends his UK stay in his pursuit to complete the purchase of the club from the array of thieves, charlatans and no-marks.