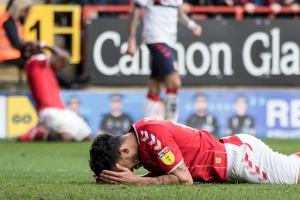 The third defeat in a row, with no goals scored and into the bottom three for the first time this season. This is not for the feint hearted.

At the end of the day it was another defensive blooper that saw us lose, Ben Purrington gifting the ball away in the 17th minute that ended with McNair scoring the winner.

Defensive mistakes are one thing, but much more alarming was the lack of bravery or any signs that this team is ready for a fight. What the heck happened, a week or so ago we’d won three from five.

Confidence and it appears any semblance of structure and attacking fortitude has been sucked out of them. Yes, this division is relentless and bloody hard, but where’s the courage and backbone?

The 2nd half was better and Bonne – who has to start at Hull – had our best two chances, but it was Boro who left with the points and dumped us into the bottom three.

I love listening to Bowyer, but words are starting to sound a little cheap. I’m still with him 100%, and questions over ESI will have to wait, although they are starting to stack. We need leadership now, and that doesn’t just sit with the manager.

Addick at The Valley: Drinking During the Game; Blackheath Addick;
Bow: “Just stick together, it’s what I’ve just said to the players. Don’t turn on each other and try and pin the blame on someone else. We have to all stick together and fight.“
Elsewhere: Wigan and Luton was 0-0, Barnsley lost at home to Cardiff 0-2. Leeds beat Huddersfield 2-0 and Stoke beat Hull 5-1.
Photo: @pedwards72