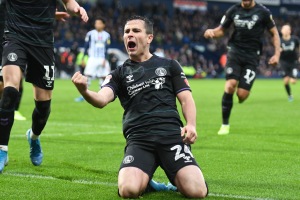 I love this team, they really don’t give a flying do they? They will go toe to toe with anybody.

What an immense couple of games, and it would have been mortifying to walk away again with another fully undeserved defeat.

West Brom are a very good side, and were very good going forward on the counter, yet our team of bandaged up warriors stood strong and once again made their mark on this great league. With 9 men injured and Leko unavailable, we had a subs bench with four academy players on it, yet, again Bowyer was able to put out a team and strategy onto the pitch that gave our opponents a real headache all afternoon.. a bit like our magnificent noisy fans behind the goal.

West Brom score goals, and get a lot of bodies forward and to go behind within 10 minutes was not ideal. Yet one of the many things to love about this Charlton team, is that they will stick to a plan and we moved the ball well and built pressure and created chances. Like on Wednesday it quietened the home stands with Addicks behind the goal baying them on.

West Brom came out stronger 2nd half and had some chances to finish the game but we weathered it, and we got our rewards. A deep high cross from Solly found Purrington who laid it into the path of Cullen whose shot was deflected high into the air, but in the right place was the man of the moment, Macauley Bonne, to head in.

Then it was groundhog day, as the Baggies had a player sent off for a bad challenge on Solly, and all hell let loose as the referee sent the wrong player off, and the home bench went 3-game ban and £4k fine ballistic (we’ll see what the FA do). But like on Wednesday this only served to wake up the home fans and drive the home side on.

Our naivety showed again as we lost a bit of game management, and although it looked as if there was a handball, Robson-Kanu fired home to put the Baggies 2-1 up. But did we lie down? No we did not.

Unlike on Wednesday Bowyer had the benefit of being able to throw on a couple of subs. Kayal came on for Pratley and another young striking project Josh Davison made his debut replacing Pearce. A long injury time was again awarded due to our opponents misdemeanours, but this time it was the Addicks who would benefit.

We may not win a softer penalty, but Sarr was scrappily bundled into and the happy to be in the limelight ref pointed to the spot with 4 minutes of injury time played.

Now, at this point I had a massive throwback to 1990, when I was stood in that same away end (it looks very, very different now) with rain coming down in the same vein, although the pitch was a quagmire that FA Cup 4th round day, and Colin Walsh missed a penalty in front of us.

Josh Cullen had no such problems as he fired in the equalizer to send the away fans into raptures. What a great result.

Addicks at The Hawthorns: Doctor Kish;
Bow: “Again the players gave everything. I think tactically we got it right again. I think first half we were by far better than them. We created a lot of chances but again we didn’t take them – the same as Wednesday.”
Elsewhere: Just 5 points separates WBA at the top to Birmingham in 11th. Sheff Wed and Leeds drew, Preston were 0-2 down at home to Blackburn but scored three 2nd half goals to claim all the points. Karlan Grant was on the scoresheet again as Huddersfield beat Barnsley and Millwall beat Stoke 2-0 leaving the Potters and Tykes are 4 points adrift at the bottom.
Photo: @K_AndrewsPhotos