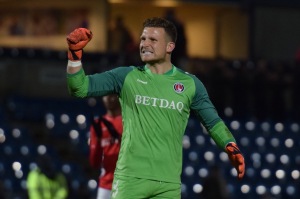 1,500 Addicks turned Adams Park into a home match last night as they sung and roared on Charlton to victory.

It wasn’t a classic but Lee Bowyer’s men ground and fought out a hard earned win against a decent Wycombe side. Bowyer juggled his squad around to rest a few legs and it was returning skipper Jason Pearce who got the vital goal expertly volleying in a cross from a lovely Josh Cullen cross on 33 minutes.

Wycombe started the quicker and attacked with real intent, and there were few awkward moments. Again Dillon Phillips was immense in goal as were Bauer and Pearce in front of him. Addicks fans were also full of praise for Igor Vetokele as well who caused all manor of problems with his constant running. Just a shame that his injuries have slowed his pace that he had when he first came to SE7.

It was 3 excellent on-the-road points and I am sure there were a few croaky voices this morning.

Addicks at Adams Park: Doctor Kish;
Bow: “I can’t tell you how proud of them I am.”
Elsewhere: Sunderland were held at home by Burton 1-1. Rochdale had a vital win at Accrington.
Photo: @K_AndrewsPhotos