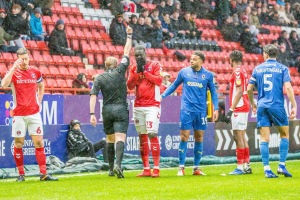 Had to be Lyle Taylor didn’t it.

After failing an early morning fitness test before the game Taylor had an injection in his toe to numb the pain, and an hour later got the all important opening goal against his flailing ex-side converting at the near post a teasing Ajose cross.

Mark Marshall added the gloss late on with a nice strike to put another 3 points on the board and sitting us in 5th as we enter the festive season.

The game didn’t start too well though. Just as I settled down with a cuppa and the radio commentary Naby Sarr was being sent back to the dressing room after less than a minute. The quickest ever sending off for a Charlton player. Looking at the tackle, there wasn’t a hint of malice but the pitch was slippery and Sarr was late, so I don’t think the ref had too much choice.

Despite being a man short we took the game to the Dons, keeping the ball well in poor weather conditions as our opponents oddly seemed happy to sit back. Then Pennock joined Sarr in the early bath tub as he stupidly collected two quick bookings to even things up.

After that, in fact also before that, only one team was going to win as we patiently built attacks waiting for the right pass. It was good game management with Bowyer saying after that he told the players to over-play, take a further pass, and not risk a speculative pass in the weather conditions. It was a smart, if not vintage performance from the Addicks.

Addicks at The Valley: Doctor Kish; Albury Addick; Addicks Third Division Diary;
Bow: “It was tough conditions, the pitch, I just walked across it there, another half hour or hour and he (the referee) might of stopped it (the game). The ball wasn’t moving too well out there.”
Elsewhere: Portsmouth and Barnsley drew at Oakwell, Sunderland came from a goal behind to managerless Bristol Rovers, and a large Luton travelling support cheered the Hatters onto a win at Coventry. Early in the day Doncaster beat Scunthorpe 3-0 and in the win of the day Bradford beat Walsall 4-0 to take them off the bottom of the table.