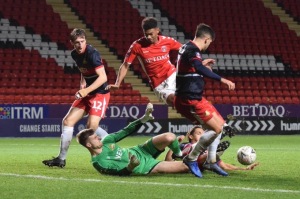 Cancel the open top bus, put the rosette back in the drawer we will not be going to Wembley this year, or with Lee Bowyer’s attitude any time soon. We were always cack in the cup, and now we can’t even be bothered.

I was very disappointed in the team Bowyer put out, especially the bench. Where’s the match-winner, game changer sat on there? I mean we are not playing on Tuesday, we have a week until our next game, so what’s with all the precautions? We’ve only just had an international break.

I see that Peterborough, Sunderland and Barnsley all put respectfully strong sides out today, as did Doncaster. I don’t get why Bowyer selected a team for the Mansfield replay to win. We may as well as gone out in the 1st Round.

Yes, we aren’t going to win the FA Cup but 3,000+ fans showed up and deserved better. Match ticket income is so inconsequential, they may as well made entry free. Prize money alone would possibly been more relevant than the matchday tickets. Yeah, I know gate receipts are shared.. but.

I get it, rest players, leave key ones at home, avoid injuries, but at least make a bloody effort. It’s a football match after all.

Addicks at The Valley:
Bow: “We’re never going to win the FA Cup, so where’s the missed opportunity?”
Elsewhere: AFC Wimbledon, Accrington, Oxford and Barnsley all go through. Peterborough and Bradford and Walsall and Sunderland both will replay. Luton, Rochdale, Portsmouth, Shrewsbury, Scunthorpe and Gillingham all play tomorrow.
Photo: @K_AndrewsPhotos