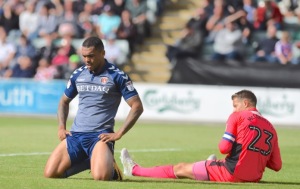 So where are we..

4 days left before we kick off at Sunderland, and we waved farewell to Josh Magennis today who signed for Bolton Wanderers. The fee is said to be £200,000, a severe haircut on the £500,000 offered to Duchatelet in January. Discounts for cash. The Belgian continues to dismantle our football club in front of our very eyes.

He asset stripped Standard Liege and he is asset stripping Charlton Athletic. Nicky Ajose is also been touted to anyone who has got a penny. Coventry City are interested but the cancerous owner thinks he can get more from overseas. Ajose will be gone by week’s end.

That leaves (Ahearne) Grant and Hackett-Fairchild up front on Saturday. The transfer deadline is Thursday week, but don’t worry we can still pick up everyone’s cast off’s and out of contract squad fillers until the end of the month.

Bowyer obviously doesn’t seem like he is jumping up and down at the prospect of Rohan Ince, Elliot Ward and Simon Dawkins. Unless RD needed to offload a salary first of course.

Meanwhile Patrick Bauer is staying. Kind off. Blackburn and Bolton have been turned down, Bauer has been offered a new contract, and the German is thinking about it. I’ve seen more concrete commitments. In Duchatelet we trust.

What happened to Tarique Fosu and Joe Aribo’s new contracts by the way?

Tarique Fosu’s hamstring didn’t make the miraculous recovery that Bowyer hinted at. Six weeks on the sidelines and without a full pre-season in him. Vetokele, Clarke and Reeves (without a pre-season in him for two years) all longer. Lyle Taylor will not feature on Saturday and we still only have one ‘keeper.

I was still a teenager with pimples when I realized that pre-season results meant diddly, but I like that Bowyer has continued to keep the spirit he nurtured when he took over, and I’m hoping that he and Jacko are building a siege mentality behind the depressing headlines. Curbs was brilliant at that.

Duchatelet kills our club cut by cut, but remember it will always be our club. COYR.