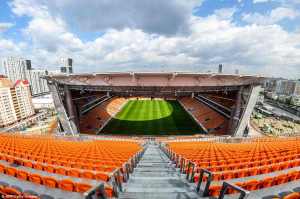 The first proper day of the World Cup. The do not disturb sign is hanging around my neck.

As suspected the Bermuda TV coverage is worst than terrible. Not sure where they stole the pictures from, but sounds as if the commentator is doing it from his sofa, and there is no pre or post game punditry and the half-time show consists of crowd scenes interrupted by adverts from local companies who have each thrown in about a hundred bucks to ‘sponsor’ it. Please don’t let me hear you moan about Martin Keown and Glenn Hoddle..

Also, during the game the screen has no score or time on it, which is a very disconcerting and a nightmare if I need a wee. Who knows what the score is and how long is left, doubt if the commentator knows either.

The crazy Ekaterinburg Arena was host to this morning’s Egypt v Uruguay Group A match. There were a lot of empty orange seats on camera but behind the goals, those 150ft high metal temporary stands were packed. Maybe it was the novelty factor or the seats were cheapest, which was a good thing as the game was rubbish.

My 4-0 bet never look like happening (I got a bit carried away after yesterday) and the game cried out for a goal for 89 minutes. It did come eventually but sadly it came too late to change a poor game. Reserve Egypt ‘keeper El Shenawi was outstanding but Gimenez’s header was perfect as Uruguay put the pressure on the Salah-less Egyptians late on.

The hosts put their mark on the tournament yesterday. Whilst I don’t think the Russian’s were brilliant they played some good stuff and scored a couple of very good goals. Mind you they will hardly be dancing in the streets of Riyadh at that Saudi performance. They were atrocious.

Let’s see if Iran and Morocco can give us better.