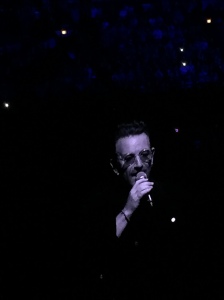 It was a night of reflection for U2 as well as the audience at Chicago’s United Center on Tuesday night. A crowd of young and old were given a familiar ceremonial big show, the obvious Bono preachings, plus of course a high tech stage production to go alongside a typical crash, bang, wallop two and half hour U2 concert.

But unlike last year’s trip down memory lane tour with the Joshua Tree anniversary, Tuesday night relied more on the recent Songs of Innocence and Songs of Experience albums but was happily interrupted with some true U2 classics.

Of course they could have played 100 tunes and still not pleased everybody but we did get a rollicking good version of I will Follow followed by Gloria. Huge visual images of Belfast a couple of decades ago accompanied Sunday Bloody Sunday, and the boys dug deep to give us Acrobat from the album Achtung Baby with Bono messaging the predominantly American audience with the line “Don’t let the bastards grind you down.”

Two of my favorites from the new album City of Blinding Lights and Your the best thing about me both got an airing as did Get out of your own way, which precluded a not unexpected Trump rant.

The encore of One, Love is Bigger Than Anything In Its Way and U2’s lullaby of 13 (There is a Light) brought the show to an end way past 11pm.

The 23,500 sell out had to suffer a 30 minute delay even though we were told in an email that day not to arrive late as the show would start promptly without us at 8pm. There was a tech isssue apparently, which can’t be any surprise as the gigantic electronic screen ran between the length of two stages with a moveable walkway in between which allowed the band to walk through a a range of visual affects and scenes including The road Bono grew up in, Cedarwood Road, a song from the album Songs of Innocence.

The smaller stage at one end was right in amongst the fans which did the trick of bringing much closer to all of us in the arena. Bono talked of experience being much better than innocence but this wasn’t a night to roll out fan favourites, and I’m glad I had spent time listening to the new album.

Bono’s voice is a strong and diverse as ever, and I actually think it has got better with age, he’s now 58. Adam and Larry were spotless artisans of course but not for the first time I just stare at The Edge on the big screen close ups and wonder at his marvel. He is a true guitar genius.

From someone who first saw them in 1984 and have long lost his innocence, I was happy to mark another notable U2 concert down to experience.