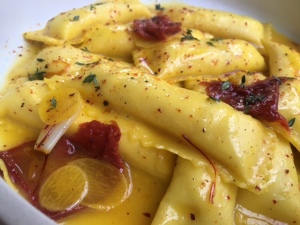 I got a little waylaid with these, well actually I forgot. But selfishly I wanted to post them, so close your eyes if you’re not interested in a little narcissism.

I going to post my final three 2017 Top Five’s in quick succcesion starting with Restaurants. Picking five wasn’t easy but I’ve had a crack so these were my Top Five Favourite Restaurants of 2017:

1. Bazaar Mar, Brickell, Miami
This superbly whimsical fish restaurant by José Andrés was like being part of a show. The restaurant is decked out like the seaside and the theatre started with liquid nitrogen caipirinhas made tableside. Great menu and foodie experience.

2. Lila, Brooklyn, New York
An old car body shop serving the most delightful tasty and colourful pasta’s (photo) in a casual setting a little tucked away in Brooklyn. The mozzarella will long live in the memory.

3. Yardbird, Miami
Southern fried chicken and waffles are a bit overdone these days, but these are the best. Busy and atmospheric location where calories are most definitely not counted.

4. Capa, Orlando
A roof top steakhouse on top of the Four Seasons with great views. More than a steak restaurant with a diverse menu and a Spanish influence. Lively spot and the drinks were pretty good too.

5. Berners Tavern, London
I took my son here and it was a real treat for us both. Far too lavish to be called a Tavern, the food and service was faultless and the menu had something for everyone with the pork pie and pickle a particular fave. A great place to watch the world and it’s inhabitants go by.