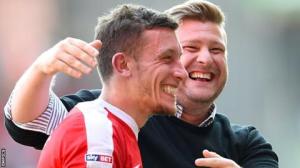 With Ricky Holmes’ contract still sat unsigned in Katrien Meire’s office, he is away on holiday incidentally, it was Jason Pearce who grabbed the Bic and scratched his name onto a contract extension.

Pearce had a contract until 2019, but with other clubs sniffing around, Pearce added a year to it, which is very good news. Pearce was influential and the stat on the OS that from the 23 games he started, we took 38 points, and when he didn’t we won 22, speaks for itself.

Pearce is a winner, and we need winners.

Two players released by Robinson have signed with other clubs. Adam Chicken, somewhat surprisingly let go, has signed a 2-year deal with Bradford, and young centre-half Terell Thomas signed a one year deal with Wigan. Thomas spent the whole of last season on loan at Woking, which where it was expected he’d end up permanently until Wigan made a shock move.

Like Loading...
Tags: Adam Chicksen, Jason Pearce, Terell Thomas
From: Charlton, Transfers
← Building a squad
A look at Charlton’s 2017/18 fixtures →
No comments yet